Important announcement this week is the online publication of a clinical narrative piece on Proximal Hamstring Tendinopathy - it is the brain child of the irrepressible Tom Goom (with a little help from Mike Reiman, Craig Purdam and me). Hopefully will prove to be a great resource for clinicians.

I had a better than usual week, locked away thinking about tendons and updating my Lower Limb Tendinopathy course for most of it (my wife thinks I’m sad, maybe I am?).

Excited to be presenting the course in Portland, Oregan, June 17-18.

Onto the blog (you can subscribe here). We are up to date again this week so will focus on a slide from the new course about sagittal plane kinematic strategy in runners with Achilles tendinopathy with some very interesting clinical take home messages.

Back to my exciting life of thinking tendons now :)

You would recall that in the blog 2 weeks ago there was a study by Lyght et al. that investigated the effects of altering step rate and foot strike on Achilles tendon (AT) stress during running. The authors found that a non rearfoot strike (NRFS) pattern was associated with greater Achilles strain and strain rate, and this translated to increase stress (force per square cm). Peak strain and stress reduced when they ran at 5% above their preferred cadence, regardless of foot strike. And we discussed in the clinical interpretation that ‘the secret ingredient of increasing cadence is reduced ankle dorsiflexion in midstance, so therefore you get less Achilles strain and stress (Hof et al 2002). This may be at the expense of shifting them a little towards a midfoot strike so therefore potentially increasing Achilles strain rate, but this may be offset by reduced strain in people with excessive ankle DF.’

On the back of that I thought it would be good to add some evidence to the theory that excessive midstance DF may be a risk factor or atleast associated with Achilles tendinopathy. Here is a review slide from my lower limb tendinopathy course including relevant studies on this… 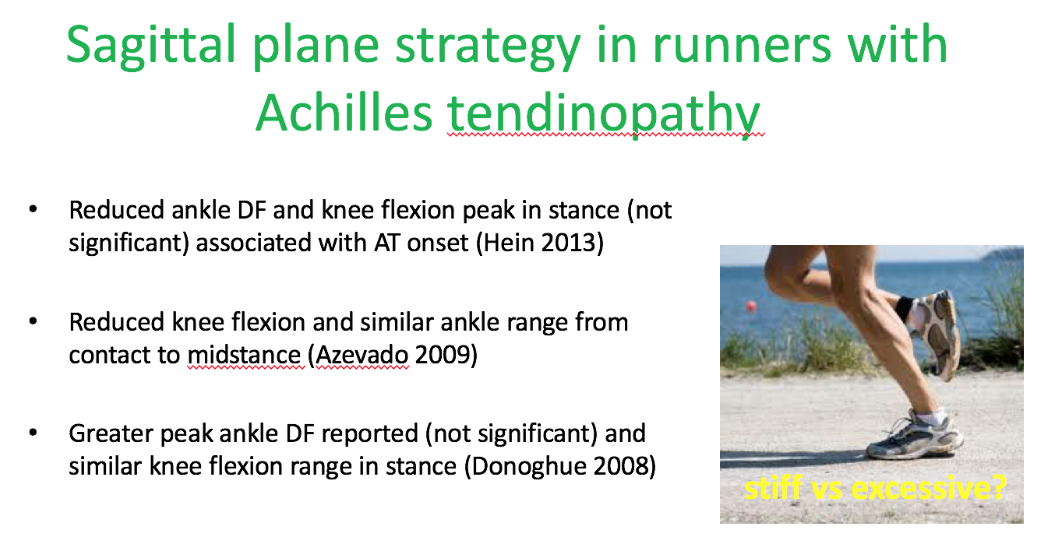 The first thing to note is that two of the studies (Hein 2013 and Donoghue 2008) discuss between group kinematic differences even though they are not significant. We need to be very careful in interpreting these findings. The findings were not significant because there was huge between-subject variability in both groups. The small non significant differences may be due to chance. If they are real they are probably a small piece of the puzzle, and clearly not a key factor for all with Achilles tendinopathy. So important that we proceed with that caveat in mind.

In terms of the study findings, the only prospective study by Hein et al. 2013 actually shows that a stiffer ankle and knee strategy predicted the onset of Achilles tendon pain, so opposite to this theory of excessive dorsiflexion increasing Achilles load. All runners in this study were rearfoot strikers. However, the other studies are more supportive, but granted they are cross sectional

The other studies are more supportive of the excessive dorsiflexion theory, but they are cross sectional so we cannot be sure that this kinematic pattern preceded Achilles pain. Azevado 2009 is interesting because they demonstrated a stiffer knee strategy but the ankle strategy was unchanged. Donoghue 2008 shows increased ankle DF (again, not significant so we need to be careful) in association with a similar knee range. Taken together, the Azevado and Donoghue studies suggest an ‘ankle strategy’ in absorbing load in the stance phase of running, which may increase Achilles load and injury risk. See photo example below of this marathon runner - at initial contact on the left and then midstance on the right and you can really see how much more motion he has at the ankle vs a relatively stiffer knee during stance, so the ankle is absorbing lots of energy. 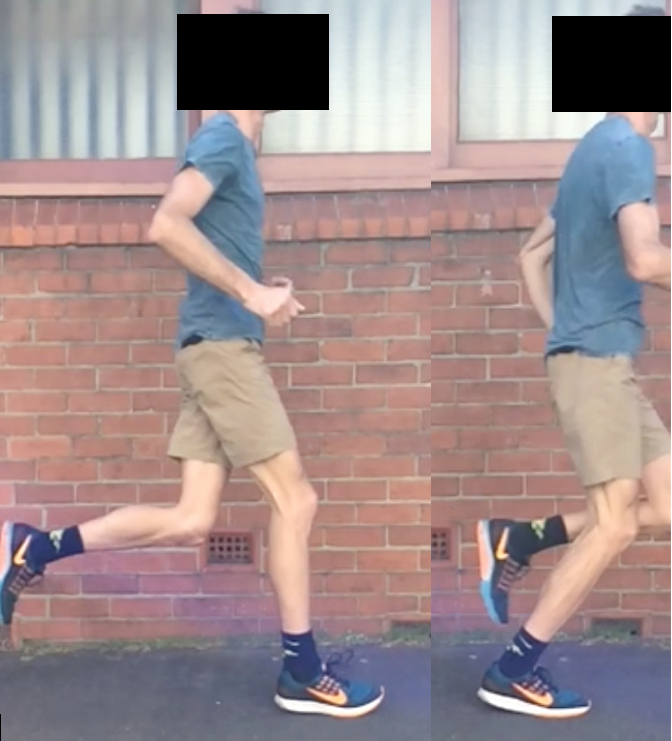 Obviously, there are many factors that may influence the kinetics and load on the Achilles other than kinematics that we are focusing on here. For example, the acceleration, available joint range, etc. We can consider kinetics clinically but obviously harder to assess, so having some indication of Achilles load from kinematics is useful.

So here are some take home clinical messages 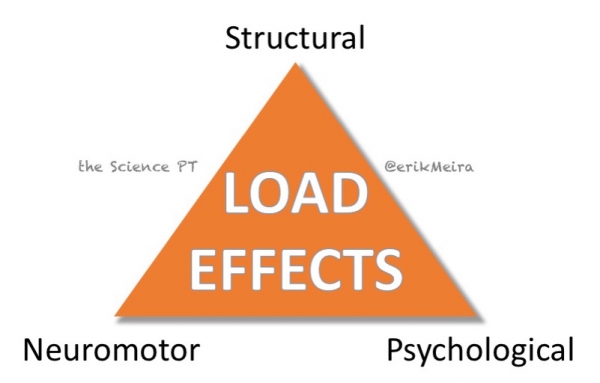 PodcastsFeb 2022
Chat with Ruth Chimenti: 'the best exercise is the one your patient will do'
Tendinopathy Rehabilitation . Hawthorn VIC 3122 . Email support@tendinopathyrehab.comTerms and Conditions . Privacy Policy