What is the best way to load pathological tendon?

The blog this week (subscribe here) focuses on a very interesting question - what is the best way to load a pathological tendon? This blog is co-written by one of my students and a physio from Sweden, Kenneth Färnqvist (@KFarnqvist) who has special interest in tendons and research in this area.

There are many parts to this question. First, is it even possible to adapt or ‘heal’ a pathological tendon? If so how do we do it? And, will this improve clinical outcomes or function or reduce risk of recurrence? Unfortunately, we don’t know the answers to many of these questions but let’s look at we do know and how this can guide us clinically…Read the full blog here.

The Lower Limb Tendinopathy Course in Portland, Oregan, July 17-18, is filling but still some places left.

Why are we talking about load and tendons anyway?

Load is everything to the tendon! It is the language that it speaks. Whatever happens in the tendon always in some way involves load. We know that tendon is sensitive to load, this means that when you load it the cells sense this load and produce biochemical that lead to changes in the tendon, sometimes positive like homeostasis and adaptation, but also pathology changes under certain conditions (e.g. too much load too soon). This is mechanotransduction. Knowing this guides us clinically because it should remind us that if we want to have any impact on a tendon then the vehicle for achieving this is load!

Where does tendon turnover and adaptation occur?

Heinemeier et al. 2013 took biopsies from the Achilles tendon in tendons that had been exposed to nuclear testing. The core of the Achilles had levels of Carbon 14 that corresponded to atmospheric levels decades prior, when they had been exposed to the nuclear testing. The authors conclude: ‘The tendon concentrations of 14C approximately reflected the atmospheric levels present during the first 17 yr of life, indicating that the tendon core is formed during height growth and is essentially not renewed thereafter.’ Kjaer et al. 2013 suggest that the outer tendon may be more metabolically active throughout life, based on studies showing a biochemical response to load in this region (see picture below). 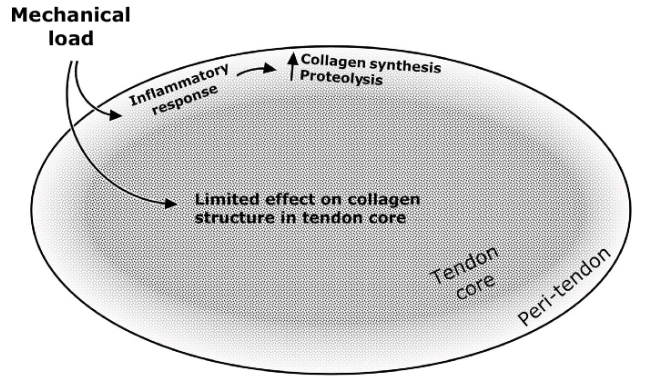 In a follow up study from the same group, Lenskjold et al. 2015 compared the CSA and mechanical properties of distance runners who had and had not been physically active in their teens, ie from 13-17yo. They found no structural or material property differences, including cross sectional area, stiffness, fibril diameter and even biochemical fibril cross links, between the groups. This suggests that if the theory that central core is formed in early life is true, then a) the tendon is not affected by running activity during that time; or b) if it is you can make up for it by adaptation (perhaps of the outer tendon) later in life.

So what type of load do we need for tendon adaptation?

We know scenario (b) above is at least partly true because multiple studies show that adult tendon adapts to load. If you apply heavy load slowly, as in a heavy slow resistance regime, or heavy isometric load over a number of weeks the tendon will adapt. This is mostly measured by looking at tendon stiffness under load. The tendon becomes stiffer, i.e. it strains less under a given load. The systematic review by Bohm et al. 2015 found that loads greater than 70% MVC (for isometric) and 70% 1 repetition maximum (for isotonic) applied for long enough (probably 12 weeks) lead to tendon stiffness adaptation. In the same review they found conflicting evidence that plyometric type interventions bring about tendon adaptation.

Why is this relevant at all for a pathological tendon?

We know that pathological tendons have changes in structure including more ground substance, thickening, and break down of the collagen matrix. Some studies also show they have impaired mechanical properties, ie reduced tendon stiffness (e.g. Arya et al. 2010). This probably translates to impaired ability to store and release energy and function like a tendon.

So is it true that if we load a pathological tendon it will adapt and heal?

Not necessarily. We know from the systematic review of Drew et al. 2012 that improvements in clinical outcome are not necessarily coupled with improved tendon structure on ultrasound, MRI and even UTC, particularly in good quality studies and with eccentric training interventions. There are multiple reasons that may explain this. Interestingly, a recent good quality study found that tendon structure on ultrasound tissue characterization (UTC) normalized after 24 weeks in Achilles tendinopathy when treated with eccentric exercise and either PRP or a saline injections (de Jong et al. 2015). It is not clear whether there was still ‘pathology’ – there seems to be because the disorganized tissue on UTC improved a little but was still there.

It makes sense based on the evidence from Heinemeier 2013 that if you have a pathological region in the tendon it may not completely heal. How can we expect parts of the tendon that have little if any turnover to adapt and heal? This fits with evidence from my PhD data were we showed that once a tendon becomes degenerative and the matrix is affected the change of that region resolving is really NIL (Malliaras et al. 2009). Once the matrix is affected this area ceases to be able to transmit load so there is no potential to repair because of a loss of mechanotransductive homeostasis (Arnoczky 2007).

This is not to say that there is no tendon adaptation occurring. Docking et al. 2015 have recently put forward the ‘donut theory’. In a cross sectional study they showed that people with patellar tendinopathy certainly had a ‘hole’ or degenerative area in the middle of their tendon but they also had more aligned collagen structure than people with normal tendons. Sean Docking's catchy saying is focus on the remaining 'donut, not the hole'. Consistent with the Kjaer theory there seems to be potential to adapt the remaining normal and outer tendon despite the pathology remaining.

This is such an important message for patients. I.e. tell them that their tendon may have as much or more normal tendon than someone else who does not have pathology, and the significance of the ‘hole’ (what a terrible word to put in a patient’s mind!) or degenerative (also not a good word for patients) area will take on far less significance to them.

Another issue with many of the exercise regimes in the review by Drew et al. is that they do not include heavy load interventions but instead lower load typical eccentric training that clinicians do. Drew et al. make a point of the study by Kongsgaard et al. 2009 that compared eccentric training on a decline board and heavy slow resistance in patellar tendinopathy. The HSR intervention was heavier and applied 3x/week whereas eccentric training was lighter and performed daily. Clinical outcomes on the VISA score were identical at 6 months although satisfaction was greater in the HSR group. Importantly, positive change in tendon diameter and Doppler signal on ultrasound was only seen in the HSR group. Maybe because the HSR group performed heavier loading? Although a similar study comparing HSR and eccentric loading the Achilles tendon did not find a difference in tendon pathology (AP diameter and Doppler signal) response (Beyer et al. 2015).

In a follow up study Kongsgaard et al. 2010 investigated eight patellar tendinopathy patients and nine controls. The controls did nothing whilst the PT group performed HSR for 12 weeks and the authors assessed tendon stiffness and fibril morphology pre and post. They found that, opposite to normal tendons, the patellar tendinopathy group had a reduction in stiffness following HSR, but on the other hand fibril morphology did change in a positive way (fibril density increased, fibril mean area decreased – they become more like the normal group).

There are important questions that remain. The Drew review and Kongsgaard studies suggest we don’t need to target the tendon to improve clinical symptoms. But are there benefits for tendon function and perhaps risk of recurrence?

Also, how do we optimize adaptation in pathological tendons? Maybe loading for longer, ie months or years? loading out of compression ie more isometric loading? Considerations for future studies.

It’s important to remember that in this blog we are focusing on specific loading for the tendon. As argued in this previous blog, first focus on developing load tolerance, second on restoring function, and by doing this you are probably taking care of the tendon because by this time you have probably included some heavy slow or isometric loading!

Here are some key messages: 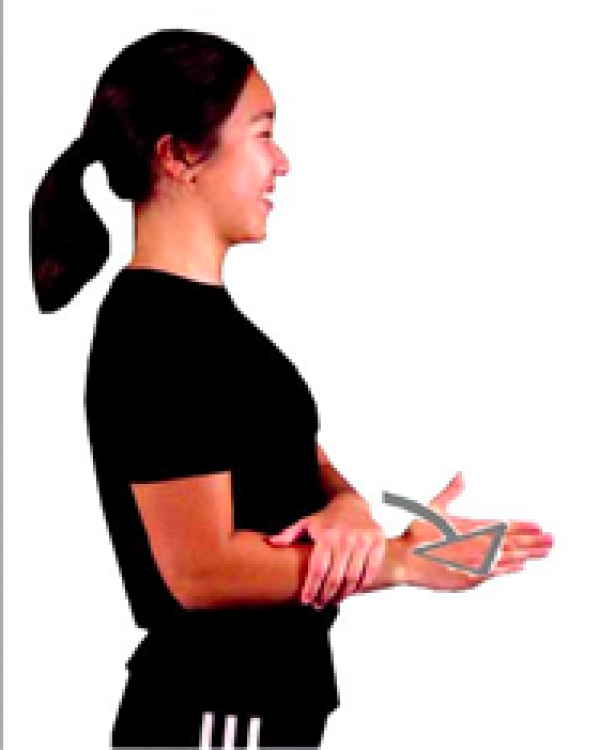 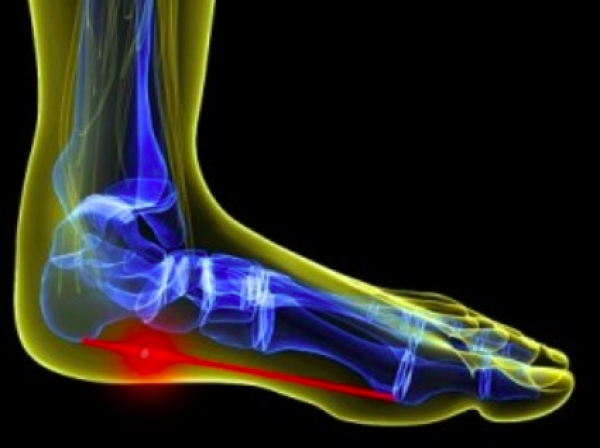