Read this to understand jump biomechanics in patellar tendinopathy

Coming to you from sunny LA today, en route back to Melbourne after a very enjoyable couple of days teaching in Portland, Oregon. Thanks to my very hospitable hosts Matt Walsh and Eric Meira – true what they say about Portland burgers and beer, they’re very good!

Mastering Lower Limb Tendinopathy Courses around Australia are filling fast. This course focuses on clinical reasoning via case studies that highlight key assessment findings and how this influences rehab and management. Book a place here.

The blog this week (subscribe here) focuses on one of my favourite topics; jump biomechanics in patellar tendinopathy – this time investigating the effect of fatigue, with some very relevant and interest take to clinic messages. The second paper extends our discussion of injections from last week with a new paper on high volume injection. When I first read this paper I thought it was a new RCT on high volume injections (HVI), which is desperately needed. It turns out to be a retrospective study but still the first study to compare HVI to another treatment. Some big limitations but an interesting read.

Background: Edwards et al. have investigated landing mechanics in athletes with asymptomatic patellar tendinopathy (PT). Here is some background of a tricky area.

People with painful PT seem to shift load away from the knee eg reduced knee moment in drop jump (Bisseling 2007). Not many studies have looked at a currently painful group because obviously they find it hard to jump. You often see a protective/stiff strategy in this group.

People with a past history of PT display variable strategies. Sorensen 2010, similar to the painful group, showed a shift of load away from the knee ie reduced knee power during a spike jump takeoff. Bisseling 2008 found greater knee extensor loading rate during spike jump takeoff, and same total knee range but a less flexion in the initial part of landing from the spike jump. The same authors also found that the previous history of PT group landed more flat footed, so not utilising a good ankle strategy to absorb load. So overall mixed findings – they may shift load away from the knee, OR increase knee loading rate, OR display poor control of landing initially, OR display a poor kinetic chain strategy for absorbing load. All relevant bits for us to consider clinically.

Few studies have focused on people with no painful history of pain but asymptomatic patellar tendon pathology. This is arguably the best model to study biomechanics that may increase risk of patellar tendon pain because pain has not had a chance to influence movement. People have asymptomatic pathology have been shown to have higher knee flexion velocity at initial contact and at time of peak patellar tendon force but similar patellar tendon loads to those without asymptomatic pathology (Edwards 2010, Mann 2013). This was during what they call a horizontal landing. Just a quick point about this – a horizontal landing is actually the landing phase of a spike jump where you run up, plant, and then jump (see figure below). So the same effectively as the spike jump takeoff mentioned above. The other interesting finding from the same papers was that the people with asymptomatic pathology moved into hip extension rather than flexion during the spike jump takeoff, so a again a poor strategy for absorbing load at the hip, so you could say they had a knee dominant strategy.

Lot’s of review there but it is an interesting area and also a confusing area because of some seemingly conflicting findings.

What they did: The authors of this new study were interested in fatigue. One of their prior studies found basketball and volleyball athletes generated lower patellar tendon loads during a spike jump takeoff when fatigued (Edwards 2014). Whether this seemingly protective alteration occurs in people with patellar tendon asymptomatic pathology is not known and this is what they investigated.

7 Athletes (soccer, basketball, volleyball) with patellar tendon asymptomatic pathology performed a stop jump (running horizontally and then stopping and jumping vertically, so like a spike jump takeoff) pre and post fatigue. Fatigue was induced with repeated 30 sec bouts of maximal jumping on a sled apparatus with 30 second rest between sets, until they could not achieve 70% of their maximal jump height (mean 14 sets). Blood lactate levels above 6 mmol·L?1 were used as the criterion for fatigue. Of note 2 participants in the study did not reach this criterion. Kinematic and kinetic data were measured during the spike jump take off task.

What they found: There was a very small reduction of vertical jump height after fatigue. Patellar tendon loading was not different between the fatigue and non fatigue conditions. There was a small reduction in vertical jump height and increase in vertical ground reaction force loading rating during the takeoff and landing phase of the jump after fatigue, although the authors deemed the absolute difference to be functionally irrelevant.  Anteroposterior force increased during the landing phase. Lower limb kinematics were similar between fatigued and non fatigued conditions.

Clinical interpretation: The key message is that fatigue did not reduce patellar tendon load during the spike jump take off. This is in contrast to the authors previous study in a healthy cohort, which used the same methods to bring about fatigue. The lack of change in patellar tendon loading, the authors suggest, indicates a reduced ability to adapt to changing conditions and limited movement variability. Lack of variability may indicate a rigid or inflexible movement system which has been linked to overuse injury. The authors speculate that the limited movement variability may have contributed to these participants developing asymptomatic pathology. A key limitation of the study, which the authors acknowledge, is the very small sample size.

An interesting study and finding. So it may not so much be the case that ‘at risk’ athletes have a ‘poor’ strategy with fatigue, but they have the same strategy. A difficult characteristic to assess clinically or in a sport setting. So how does this change our practice? What we can do is consider factors that may influence movement variability and address them. These are likely to be fairly individual, but we should consider motor capacity, control, as well as movement variation within rehab and training contexts. One thing I have got into a lot recently is variability within hopping routines as a way to influence motor control and movement variation within a classic energy storage rehab/training context.

The first study to compare high volume injection to another treatment

What they did: Wheeler et al. have published a retrospective study comparing the effect of two different types of high volume injection (HVI) administration – the first study to compare HVI to another treatment I believe. Until now there have been only case series which have show positive results in favour of HVI. This research is timely as in the blog last week that focused on the use of PRP in tendinopathy management, I eluded to the lack of evidence based injection options. For example, steroid is potential harmful and may be associated with poorer long term options.

The authors identified patients who had undergone HVI for midportion Achilles tendinopathy with the 2 different methods between 2013 and 2015. The first HVI procedure was performed by a single musculoskeletal radiologist and involved injecting 10mL of local anaesthetic followed by 40mL of sterile saline (total 50mL volume) between the Achilles tendon and Kager’s fat pad under ultrasound guide (Fig 1). Post injection patients were advised to start eccentric rehab from from day 3 and were reviewed regularly (every 2-3 weeks). 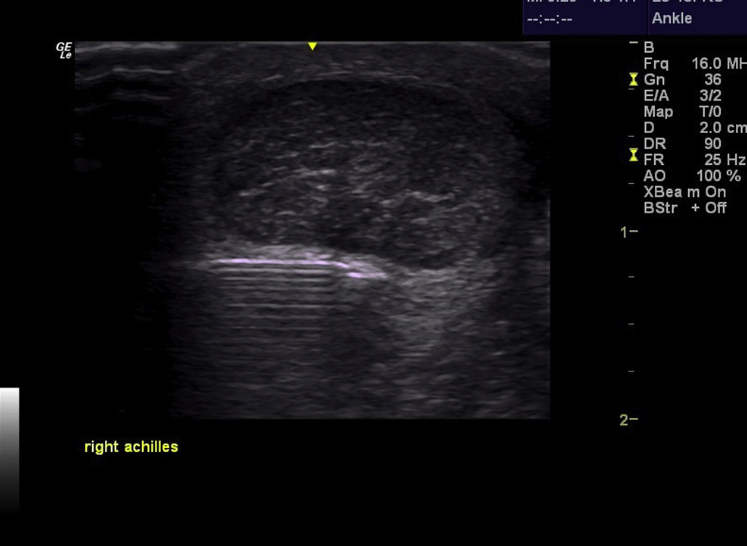 The second HVI injection was performed by another radiologist and involved dry needling the tendon using a 21-gauge by 40-mm needle under ultrasound guidance. The needle was then advanced between the anterior Achilles and Kager’s fat and 10mL of local aneasthetic followed by 30ml of normal saline was injected (total 30mL volume). Patients were advised to rest from sport and rehab for 2 weeks and there does not seem to have been a structured rehab program after this time in this group. They were reviewed at 6 weeks, and then 3 and 6 months. 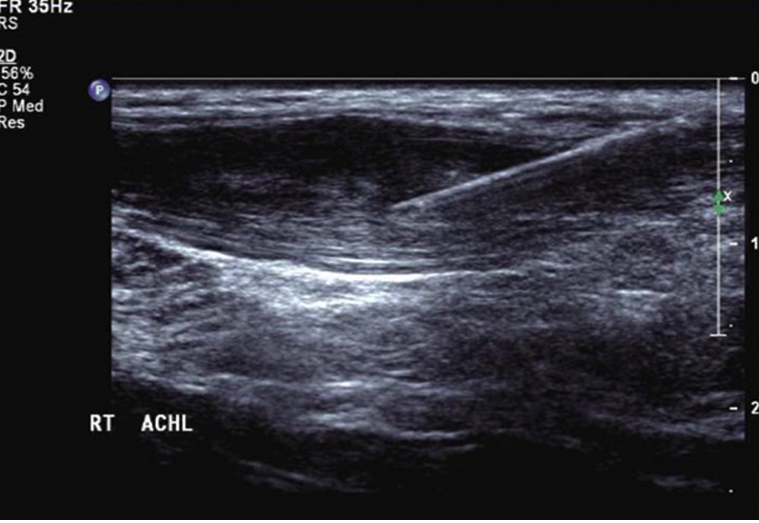 Clinical interpretation: This is a retrospective study comparing 2 HVI procedures at a single hospital. The positive effect in favour of the high volume injection may be explained by the fact that this injection was 20mL higher volume, but (and it is a big BUT), there may be many other explanations. These may include 1. Differences in the samples eg the duration of symptoms may have been longer in the lower volume group; 2. Dry needling in the lower volume group may have had a detrimental effect; 3. There seems to be no rehab component after the second injection and they rested this group for longer after the procedure. For me the fatal flaw is the last point, particularly not having a rehab component. Let’s not forgot, it is hard to get a lasting positive effect in the tendon without mechanotransduction. So I think the strongest message from this paper is whatever you do rehab needs to be part of it!

My personal opinion on high volume injections is that they are useful for treating pain, worth a try with good results in some, including inseason athletes. But key point is leave the steroid out (as they have done in this study) – why risk potential long term worse outcome and worse (but less commonly) rupture or partial tear.

PodcastsMay 2019
Isometrics in Tendinopathy: they are useful but they are not the cure for cancer! 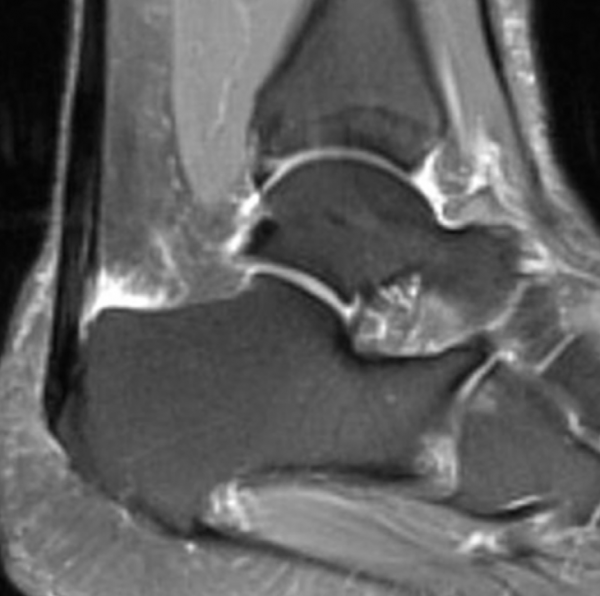 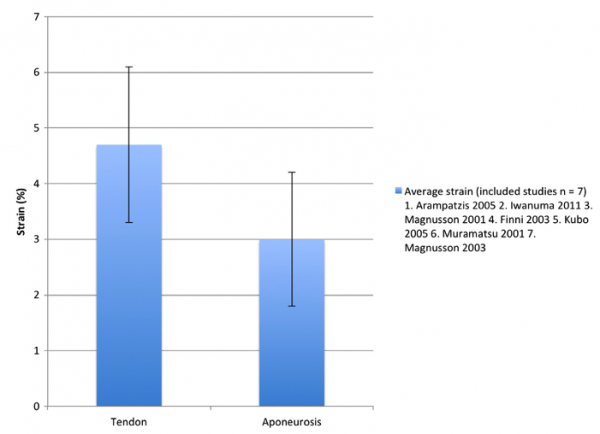