If you want more clinical tendon info than is in these blogs, the Mastering Lower Limb Tendinopathy course will be in Melbourne, Perth, Adelaide and Canberra during 2017.

Interesting study to review this week from Oda et al. Co-authors include Paavo Komi and Masaki Ishikawa who have done lots of work on stretch shorten cycle. In this study they explore muscle-tendon unit functional changes during double leg hopping among people with a prior Achilles tendon rupture. There are implications for rehabilitation, but also insights into how and if pathological tendons adapts to load.

Background: Achilles tendon (AT) rupture is an extreme injury.  If left untreated the person will most likely lack planterflexion for the rest of their lives and walk with a characteristic apropulsive gait with hip external rotation. Thankfully, most people are treated and whether it is surgery or conservative treatment have the potential to have a good outcome.

Some studies have reported reduced AT stiffness within 2 years of repair (e.g. Wang 2013). Other authors have shown increased tendon stiffness 2-6 years after repair (e.g. Agres 2015). My experience is that certainly beyond 2 years there is lots of fibrosis and thickening and perhaps therefore increased stiffness is not unexpected  at this time. The authors of this study were interested in the neuromechanical behavior of the repaired AT 1-2 years after repair. In particular, whether the tendon is more complaint (less stiff) and how this influences the calf muscle activation, Achilles force and stretch shorten cycle function of the tendon.

What they did: They recruited people with a unilateral prior AT repair to hop bilaterally and recorded oodles of data. Makes my eyes water reading it. The instruction was to perform bilateral hopping symmetrically for 10 seconds as high as possible. They report that they confirmed subjects did not have fear or pain after the hops. Here is a summary of the neuromechanical measures they took during this task:

They used an electronic pulse to synchronise the ground reaction forces, high speed video data, ultrasound video data and EMG data. Using all this rich data they were able to calculate the following:

The only kinematic difference between legs was that the prior AT repaired group had more ankle DF at toe-off (6%). Contact time and time to peak AT force were also similar between groups. This suggest that both legs moved in a similar way, which you would expect for a bilateral hopping task.

The key differences between legs were reduced peak AT force on the repaired side (14%), and this leg also had more Achilles stretch or strain in the braking phase (6.8% compared with 4.6% in normal tendon) and less shortening of medial gastroc in propulsive phase. The Achilles stiffness and modulus during the hop were also lower in the repaired AT (makes sense because there was less force going through it yet more elongation). Soleus and tibialis anterior ratios for SLR/post 30ms were lower for the repaired AT yet the braking phase soleus activity was greater. Finally, there was less positive work and less positive to negative work ratio in the repaired AT. The figure below shoes that the force enhancement in the concetraic or propulsive phase is lower for the ruptured versus normal AT (see shaded area in force-velocity curve). 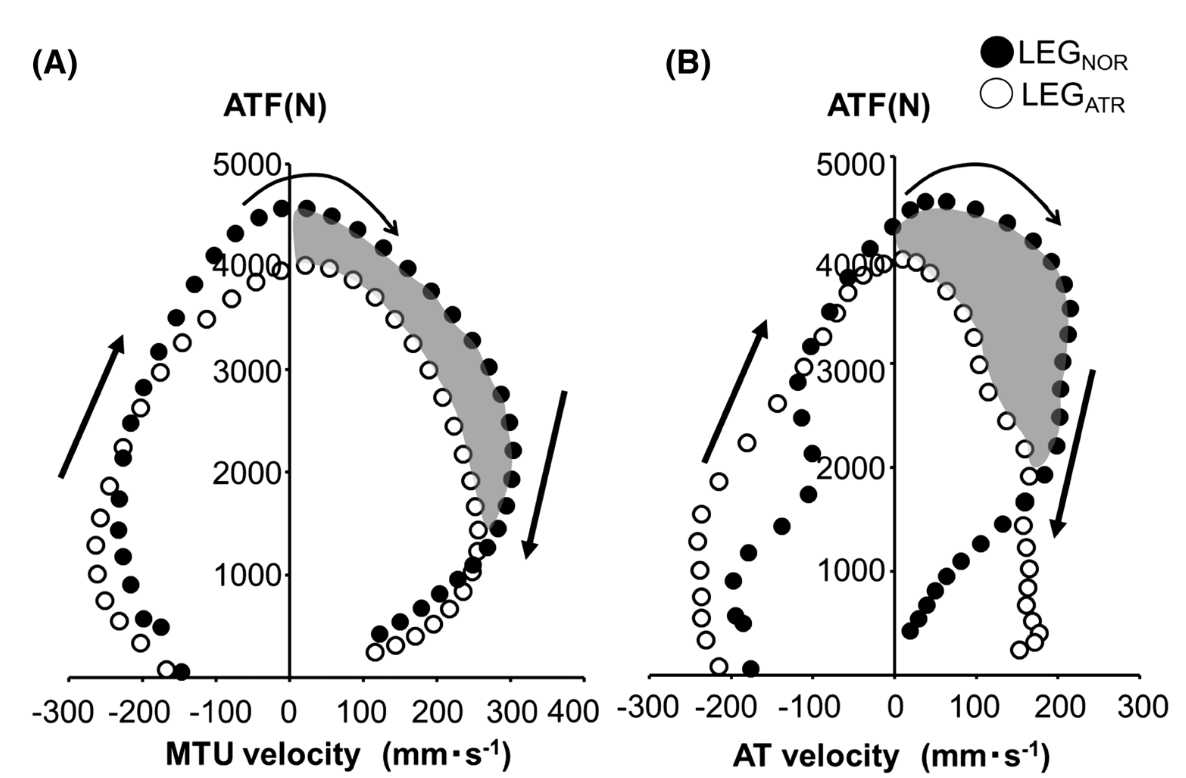 Clinical implications: These findings indicate that the repaired AT is more compliant and overstretches in the braking phase of hopping (soleus works harder here, possibly because of the increased compliance). Probably as a consequence of greater compliance, the tendon is not able to utilize stored energy for positive work in the propulsive phase (ie the stretch shorten cycle spring mechanisms of the muscle and tendon is affected, ie there is greater hysteresis or energy lost). The authors suggest that a preprogrammed strategy to protect the Achilles is obviously not happening here and that seems sensible given the increased Achilles stretch. It is possible that the increased soleus activation in the braking phase is a compensation for reduced motor output (e.g. maximal voluntary contraction) of this muscle (which was not measured by the authors).

We don’t know what rehab these people had but I would guess not enough loaded progressive seated and standing calf raises (based on my biased experience seeing these patients). Maybe this would help to restore muscle-tendon function, maybe it would not – we still need to find out.

A limitation to consider is that they compared unaffected side vs affected, and we know that the unaffected may suffer motor output deficits too to some extent.

So what are the key take home messages?

PodcastsJul 2018
What’s the deal with gluteal strength and patellar tendinopathy: big fish, small fish, or not even in the sea? 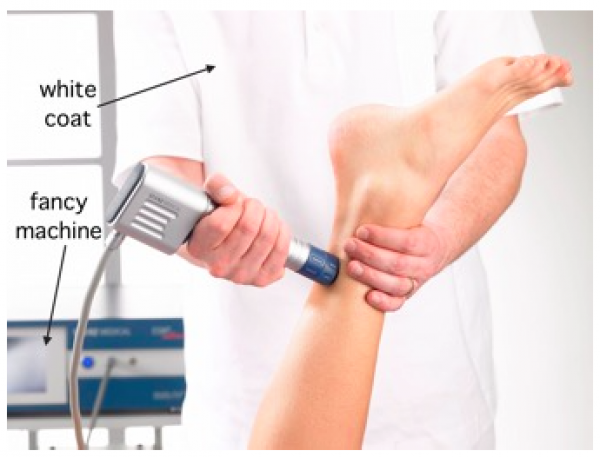