Movement patterns NOT to miss in your gluteal tendinopathy patients

Welcome to tendinopathy blog 4. The reason I love the relationship between movement, ‘strength’ and injury is that it is not straight forward – we explore this relationship in the first study in the blog which is on walking biomechanics in gluteal tendinopathy. A surprising study on tendinopathy incidence/prevalence and an anatomy dissection study provoking some thoughts around rehab of proximal hamstring tendons round off the blog this week.

Please leave a comment / feedback / suggestion in the comments section under the blog, would love to hear from you.

You can subscribe from the http://tendinopathyrehab.com/homepage, and check out upcoming tendinopathy courses in Melbourne and Perth here.

We lead this week with another fantastic study from Kim Allison and team (remember I included their study investigating hip strength in tendinopathy patients a couple weeks ago). This time they investigate kinematics and kinetics in walking among gluteal tendinopathy (GT) patients – which is a first. In walking, the ground reaction force during stance is medial to the hip joint producing an external hip adduction moment that is resisted by the hip abductors (see figure below). The figure below also shows that with more pelvic drop (ie Trendelenberg) the GRF is even more medial in relation to the hip joint centre, so the external hip adduction moment is greater (and hence the force from the hip abductors to resist it is greater). The authors explored whether GT patients display these patterns in walking.

They included 40 participants with GT and 40 age (35-70) and sex matched controls (78% women in each group). Participants walked barefoot on a 10-meter walkway – hip kinematics and force data were measured and joint moments were calculated. Gluteal tendinopathy patients walked slower and with smaller step length (this was statistically controlled so it did not affect the group comparisons) and had on average 2/10 pain during walking. The main findings were; 1) greater external hip adduction moment in stance in the GT group; 2) small (1.2-1.4 degrees) but significantly greater contralateral trunk lean and pelvic drop in the GT group; 3) contralateral pelvic drop explained most of the variability in hip adduction moment; and finally 4) 2 subgroups were identified in the GT group – those that had ipsilateral trunk/less pelvic drop, and those with contralateral trunk lean/greater pelvic drop (see figure above) – these subgroups may explain why kinematic differences between groups, although significant were small.

Adductor moment and pelvic drop may relate to injury by 1) simply meaning glut med/min are loaded more to resist the higher hip add moments (seems counterintuitive as atrophy of glut med/min has been reported in GT patients, but this is probably secondary and 'weakness' may not be the driver of these kinematics - read the 1st study review in this blog for details of other potential drivers.  2) there is more compressive load on these tendons due to greater pelvic drop. Other hypotheses put forward by the authors are 1) glut med/min muscle tendon units suffer length-tension compromise with these kinematics and this results in more passive tissue load – possible but you would think the muscle would adapt to this pattern if habitual, so maybe it has a ‘shifted’ the length-tension curve (more strength in outer range) rather than compromised length-tension. and 2) maybe GT patients do have weaker glut med/min and rely on synergists like TFL to resist the greater hip adduction moment related to contralateral pelvic drop - this would mean that less glut med/min tensile load but perhaps compressive load is the issue. Thought provoking stuff. Take home message for clinicians – yes, ‘strengthening’ the gluteals is often important, but don’t forget to consider kinematics and the mechanisms driving them eg muscle activation, tendon pathology leading to electromechanical delay, fatigue, etc, etc!

Albers et al. investigated the incidence and prevalence of lower extremity tendinopathy (including adductor, greater trochanteric, jumper’s knee, Achilles and plantar heel pain) in a Dutch general practice (GP) population. The International Classification of Primary Care was used to document the reason for the GP visit. The prevalence was 11.83 and the incidence 10.52 per 1000 person-years. The prevalence and incidence rates of individual tendon injuries is shown in the table below. Lower extremity tendinopathy was more common among older patients. The incidence of lower extremity tendinopathy represents 3% of all locomotor injuries in this Dutch population, and was higher than the incidence of osteoarthritis in the same year (2012). The authors rightly state that..” While prevention of osteoarthritis is already high on international research agendas, the prevention of tendinopathy has received little attention.” Of course the limitation of this research is that only people seeking help are captured so the incidence may be underestimated. Another limitation is the accuracy of the diagnosis in this type of design. 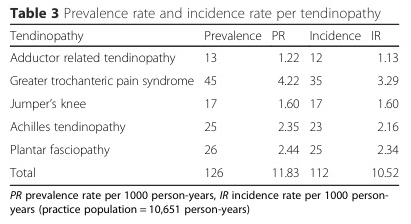 Obey et al. have studied the anatomy of the adductor magnus origin. 11 adductor magnus and hamstring muscles in 8 cadavers were dissected, the dimension, shape, and orientation of the tendon footprints on the ischial tuberosity were determined. They found the hamstring portion of the adductor magnus tendon was consistently present just medial to the conjoint tendon of biceps fem and semitendinosus (see figure below). The study really focuses on the importance of appreciating this anatomy in considering whether surgery is required and then planning the surgery for suspected hamstring avulsion cases. However, there are also implications for proximal hamstring tendon (PHT) rehab for a couple of reasons…1) the hamstring portion of the adductor magnus may be involved in this pathology (not uncommonly these patients point to pain more medial and anterior in the ischial tuberosity, ie right in and under – lose your finger when palpating type of region! (PS be suspicious of ischial stress fracture too with pain in this region, especially in women), and 2) it highlights the synergy between the hamstring and adductor magnus and that adductor magnus is our ally, but may be overactive, in rehab for PHT. For both of these reasons, it is important to assess adductor muscle function in PHT rehabilitation – often an important component of the rehabilitation process for these patients. 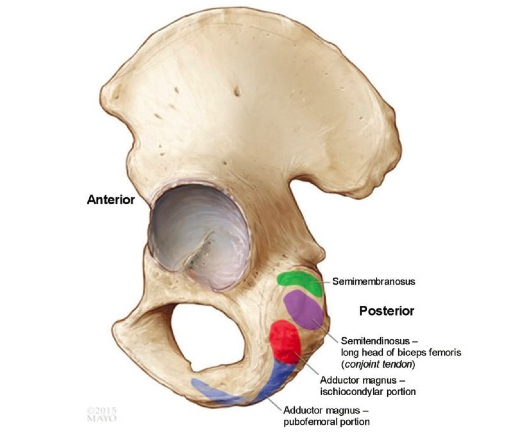 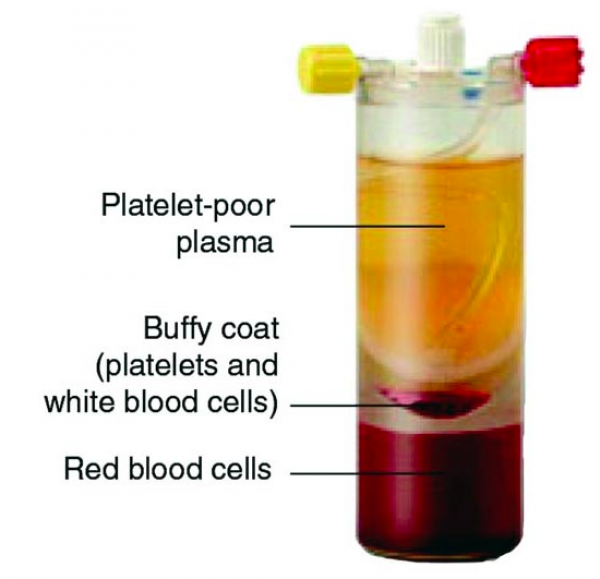 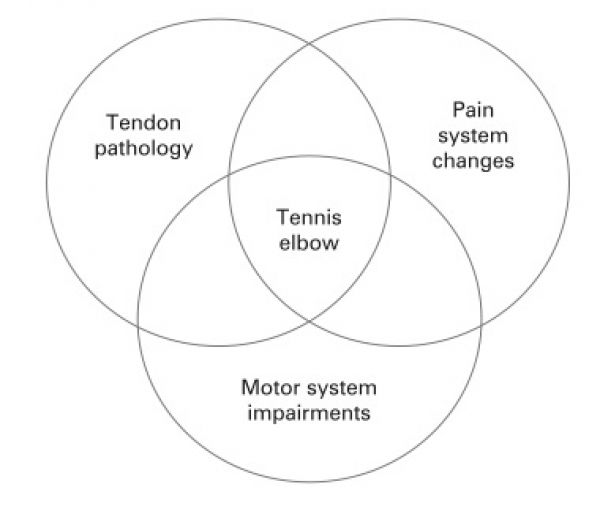