Firstly, sorry for the lack of consistent blogs the last couple of weeks. I have just returned from 3 weeks of conference and teaching leave which turned out to be more action packed than I anticipated. Meet some great people along the way!

Tendinopathy blog number 37 (subscribe here) focuses on a paper that investigates the diagnostic utility of various hip tests. Some really interesting and useful findings, but as the authors are very upfront in declaring the issue is the gold standard was MRI which can create issues. Hard to see an alternative but maybe there is based on clinical diagnosis? I discuss this in the blog.

Background: An all star group including Allison Grimaldi and co authors have produced a very interesting study investigating diagnostic utility of tests for gluteal tendinopathy. They argue that diagnosis of lateral hip tendinopathy or gluteal tendinopathy can be difficult to diagnose which sometimes leads to inappropriate and unnecessary treatment. I agree it is often misdiagnosed, but would argue it should not be hard to diagnose, even based on clinical history, if you are paying attention! More on this later.

What they did: They investigated the diagnostic utility of palpation of the greater trochanter as well as several provocation tests. They included people with lateral hip pain >4/10 in intensity for more than 3 months. They were excluded if they had a steroid injection for the lateral hip in the last 12 months or had hip or back pain, neurological disorders or fibromyalgia. Not sure about excluding people with hip and back pain because many gluteal tendinopathy patients have a component of hip or back but this is not the source of their hip pain, so it is arguably an overly selected sample.

They tested the hip flexion/adduction/ER +/- resisted IR (FADER), passive hip adduction in sidelying +/- resisted abduction (ADD), single leg stance, and greater trochanter palpation. See photos below of the FADER and ADD tests. They all had a hip MRI and the radiologists reported on gluteal tendinopathy, bursitis, osteoarthritis, labral pathology or any other observed pathology. Clinicians performing the tests were blind to MRI findings, and radiologists reporting MRI were blind to clinical findings. They used gluteal tendinopathy on MRI as the gold standard. 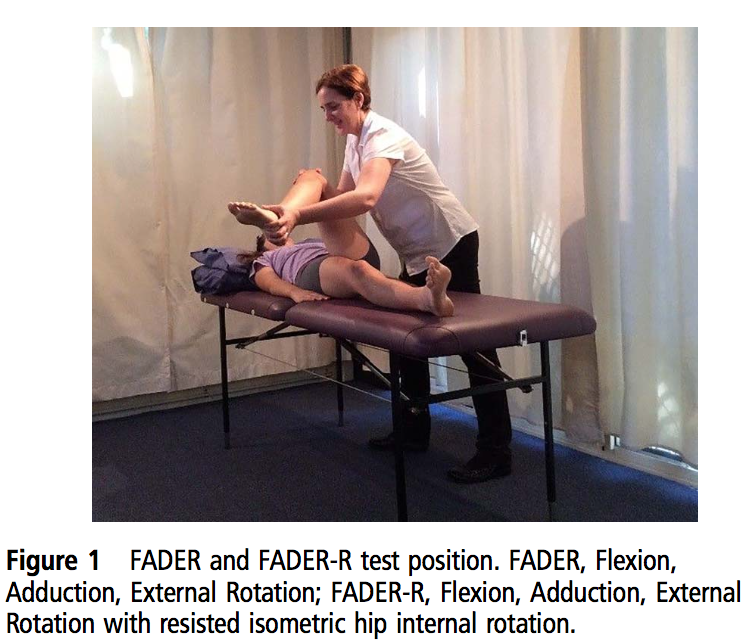 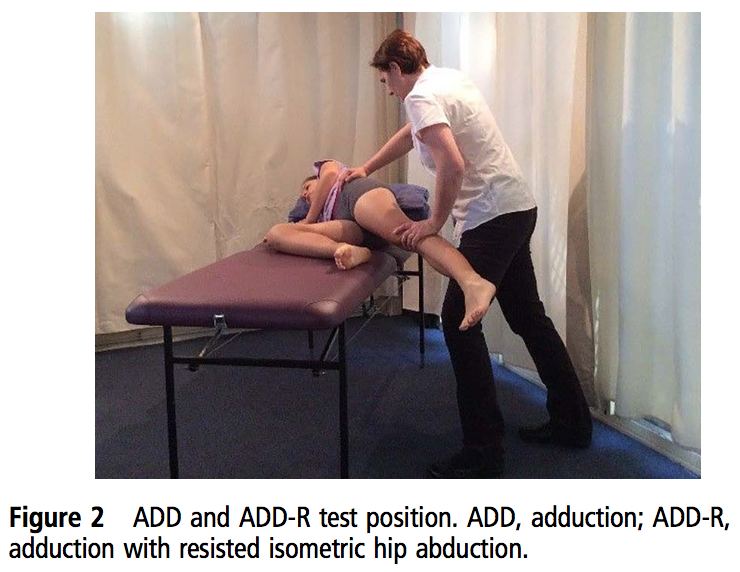 The authors also provide positive and negative likelihood ratios (LR) and examples of how these can be used to work out post-test probability if the pre-test probability is known. For example, if it is assumed that the probability of someone with lateral hip having gluteal tendinopathy is 50% (50% chance it is another source eg hip, lumbar spine), then the odds are 1:1. If you then work out the post FABER test probability it is about 88% (positive likelihood ratio is 6.6, so new odds 7.6:1, new probability = 7.6/8.6 or appox 88%). Pretty sure the authors worked it out in a different way but their figure 4 gives a very similar result. So the FABER test greatly improves confidence that someone has MRI gluteal tendinopathy. (PS thanks Rod Whiteley (@Rod Whiteley) for the explanation of the maths when I attended his excellent hamstring talk at the Sport Med Australia conference recently. Was very useful, although I’m pretty sure I still butchered it!). A key point is the pre-test probability needs to be known to work out post-test probability using the likelihood ratio, and often it is not.

Clinical interpretation: The main finding of the study is that adding palpation (high sensitivity) to the other tests (high specificity) is probably the best way to go for diagnosing gluteal tendinopathy. The clever part of this study is that they included people with lateral hip pain but defined some as not having gluteal tendinopathy and this group acted as controls in testing the utility of the tests. This is an advantage to having completely painfree controls because it shows that some tests with high specificity eg SLS and FABER and ADD can differentiate lateral hip pain that is likely to be gluteal tendon related from other sources eg the hip.

The key issue with this study is that the gold standard was imaging. Therefore, there are always going to be lots of false negative tests associated with asymptomatic positives imaging. Aside from palpation and this is probably because we know palpation is often painful among people who do not have gluteal tendinopathy clinically.

Gold standard is tricky, what else can you use? Perhaps it is better to use clinical history and then assess diagnostic utility of the load tests ie FABER, ADD, single leg stance? In the clinic I base gluteal tendinopathy diagnosis on:

2)     pain behavior (ie they report local lateral hip pain (a bit of spread is ok) on arising after prolonged sitting, positions that load the gluteal tendons ie sleeping on the side and crossing legs, and increased local lateral hip pain post walking (this one is hard to ascertain for many gluteal patients because they are often walking the same amount daily and don’t really have a clear 24 hr or time based response to loads lie walking unless they throw an extra long walk in occasionally, eg on weekends);

3)     you ascertain local lateral hip pain with load tests such as step up, hip hitch (the goal is to establish a contractile dysfunction of their lateral hip tendons) and;

4)     absence of lumbar or hip causes that explain the persons pain – I’m ok with them having a lumbar or hip component as many do, eg some back pain that can be reproduced perhaps with lumbar extension, as long as it does not explain their lateral hip pain.

So the key is local lateral hip pain reproduced in the way you would expert for a gluteal tendinopathy patient + diagnostic work up to exclude other sources. So I guess another way to establish the diagnostic utility of the tests in this study is to compare them to diagnosis based on clinical history and examination. You could also assess the diagnostic utility of the load tests i.e. step up and hip hitch as well whilst at it. The findings of this study partly support an approach of assessing the load tests because they found that when adding a resisted contraction, the FADER and ADD tests had increased specificity. Food for thought and I welcome opinion and debate! 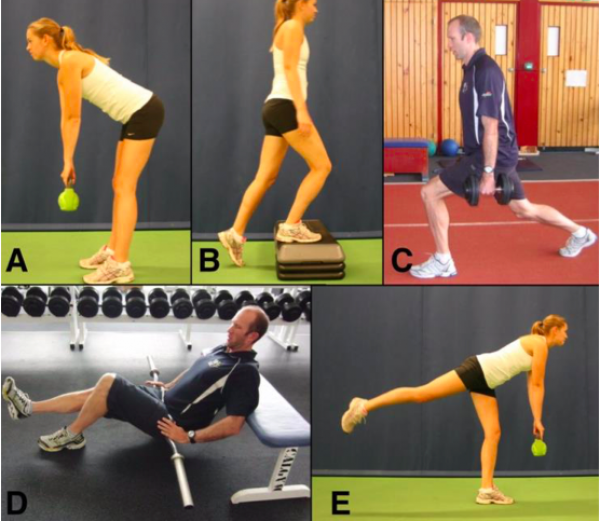 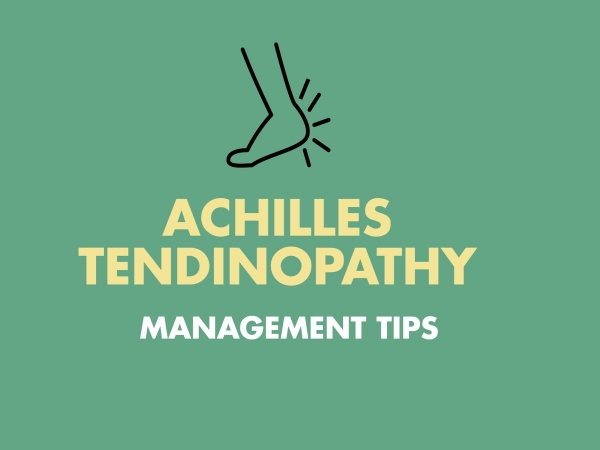