The blog (subscribe here) this week focuses on a study investigating whether pathology influences Achilles tendon strain during a single leg jump. It took my interest because so far we mainly have studies that investigate Achilles strain when someone is performing a maximal isometric contraction. How this relates to function is really not known. This study provides a snap shot into that…with some interesting take home messages.

Title: Influence of Age and Pathology on Achilles Tendon Properties During a Single-leg Jump

Background: We all know that too much load is linked with tendinopathy. What we know much much less about is what type of load and how much. Loading that occurs during a stretch shorten cycle (e.g walking, running, hopping, jumping, etc) when the tendon stores and releases energy very quickly has been linked with tendinopathy (Malliaras et al. 2015). It makes sense because the whole idea of stretch shorten cycle is to make the activity very tendon focused. Ie the muscle contracts quickly and strongly to harness spring like function from the tendon. This then allows greater passive contribution to energy requirements from the tendon and there is less muscle energy requirements because the fascicles operate nearer to an optimal range – It’s a beautiful thing!

So precisely because it is a tendon focused activity involving lots of tendon strain, the tendon is loaded more! For example, during hopping, the Achilles strains (e.g. 8.3% Lichtwark  et al. 2005), which is more than during a maximal isometric calf planterflexor contraction (e.g. 5.1% Arampatazis et al. 2007). Strain is proportional to load, so the load must be higher with hopping. Also the strain rate is higher.

So the amount of tissue strain (stretch) and the rate it occurs are probably important for tendon injury. These are measures of load intensity, but also how much people do, i.e. volume is also relevant. It is tricky and certainly not a straight forward area. Key take home message; ask patients about stretch shorten cycle loads (intensity and volume) when assessing whether they have a tendon issue! Especially as we know CHANGE IN THESE LOAD.

So now back to our paper and the story of this blog. A gap in the literature relates to whether pathological tendons actually strain more during functional activities that involve stretch shorten cycle, like jumping. You would think they do for 2 reasons; a) when pathological the tendon is probably ‘weaker’, we hear lots about degradation of matrix, inferior quality collagen, etc, etc ; b) there is some evidence that if you test the ‘stiffness’ of pathological tendons, ie how much they stretch for a given load (which is incidentally the inverse of the ‘compliance’), they are less stiff or more compliant than normal tendons (e.g. Child et al. 2010). But we don’t actually know if increased strain occurs during functional movements like it does during maximal voluntary contraction.

If they do strain more perhaps this sets up a negative feedback loop: i.e. greater strain during functional load à greater tendon load and more pathology à further tendon strain during functional movements à inevitable rupture. The glaring issue with loop this is that tendons that are painful do not often go onto rupture. Maybe the end point then is continued symptoms.Lot’s of ifs and buts. The point is if pathological tendons strain more with functional tasks there may be implications.

What they did: The authors recruited three groups. 10 adolescents (mean age 13+/-1 years), 10 asymptomatic adults (means age 37+/-8) and 10 people with Achilles tendinopathy (mean age 40+/-7). Participants in the healthy group were excluded if they had ultrasound pathology. All participants were recreationally active in sports (similar time spent per week). The adults were matched for age, height, weight and gender. They measured Achilles tendon cross sectional area (CSA), thickness in the anteroposterior plane and length with conventional ultrasound. Prior to jump tests, participants performed a standard warm up in an isokinetic dynamometer of 3 submax and 2 max 5 second maximal voluntary contractions. They had an ultrasound probe attached to the muscle-tendon junction of their medial gastroc using a custom built device (see photo below). Participants then performed a maximal single leg hop on a force plate. They did this 3 times after some practice goes. They worked out Achilles strain based on the formula strain = (AT elongation / AT length) x 100. They also worked out AT compliance which was based on the ground reaction force from the force plate (AT compliance = AT elongation / force). 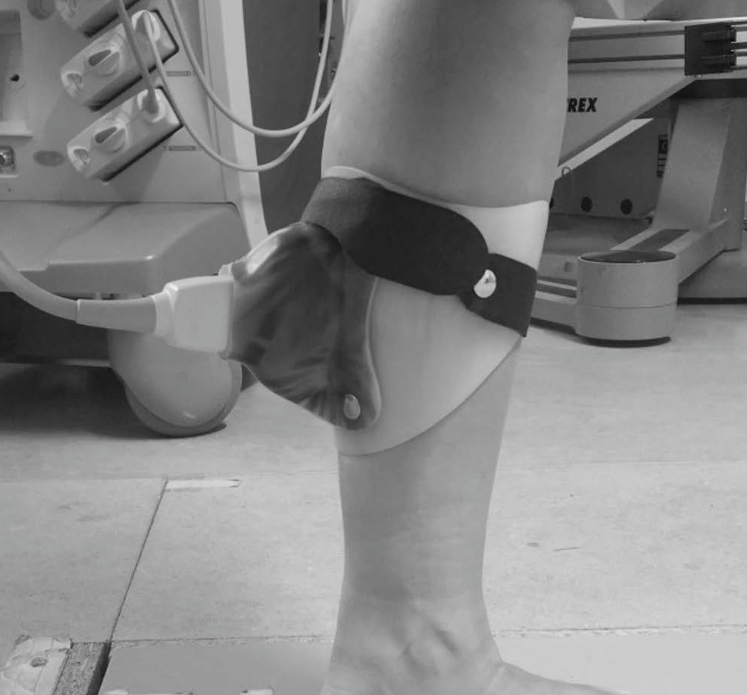 What they found: Just quickly about the old versus young comparison (I think this is the least interesting part), they found children had greater elongation and compliance than adults – ie more stretchy tendons under similar load. In contrast Waugh et al. 2012 found less strain in kids but they investigated strain using traditional maximal voluntary contraction methods.

Adults with pathology had greater Achilles tendon CSA, thickness than adults without pathology. There was a trend towards greater elongation (p=0.055 – I wonder what the post hoc power was?) but no difference in compliance in these groups.

Interpretation: Elongation (stretch) approaches significance, whereas compliance (stretch at a given load) did not, probably because ground reaction force was slightly higher although not significant in the pathological (1389 ± 288) versus the healthy group (1287 ± 225).

Based on this evidence you could conclude no evidence to support greater compliance of pathological tendons during functional movements, which contradicts studies looking at compliance when tested with the traditional maximal voluntary contraction method.

However, one simplification the authors made looms large. That is, they used ground reaction force (which is absorbed by the entire lower limb, not just the Achilles) rather than Achilles tendon force to work out Achilles compliance. This is an issue because we know that Achilles patients will most likely change the way they hop to favour more of a proximal strategy, in an attempt to reduce Achilles load.

So whether we have increased Achilles strain during functional movements is still up for debate!

1 = consider change in movement strategy, and most likely a strategy to shift load away from the injured Achilles. If present it often improves with the person’s confidence in moving and with improvements in pain. If not, then specific functional variability training to regain motor capacity may be indicated.

2 = but then once you get that person confident to move again if the tendon is more compliant will this be an issue. The answer as discussed above is we do not know. But why not, if it is straight forward, intervene anyway? We know from the Bohm review that normal tendon adapts to loads >70% MVC and >70% 1RM. The issue is we don’t know if this happens with pathological tendon and whether it is necessary to target this mechanism when managing someone with Achilles tendinopathy. So take this uncertainty on board but my advice is, have at least one heavy load rehab exercise in your program, that way you cover that possibility.

PodcastsApr 2018
Non-uniform Achilles tendon strain: What is it and should we care? 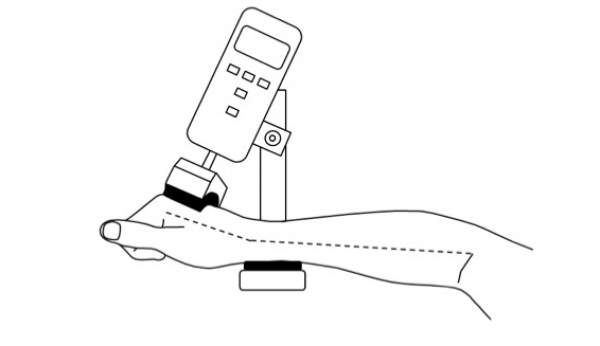