Achilles strain changes with exercise and warm up

Here is a link to upcoming Mastering Lower Limb Tendinopathy Course dates around Australia.  Run by the APA but any clinician who treats tendon injury is very welcome. The course focus is bridging the gap between research and clinical practice and giving clinicians not only knowledge but practical skills to manage lower tendinopathy better.

Let’s press on with our blog mission of translating tendinopathy research into practice! (subscribe here) There are a couple of interesting papers this week. First a review by Stijn Bogaerts and team. Stijn (Twitter: @stijnbog) currently completing his PhD on assessing regional strain in the Achilles tendon and has produced a review that basically gives you everything you need to know about tendon strain (stretch) eg how does it change with loading, warm up, aging, whether it is uniform in the muscle and tendon – with implication for tendon pathology and rehab.

Everything you need to know about Achilles tendon strain

What they did: PhD student Stijn Bogaerts (Twitter: @stijnbog) and co workers have reviewed studies investigating Achilles tendon strain. They included studies that assessed Achilles tendon strain in vivo among humans. Have spoken to Stijn about the study over the last week he has been kind enough to offer some very insightful comments.

What they found: 47 articles were eligible for inclusion. Most studies used 2D ultrasound to measure stiffness – 2 points in the tendon are tracked with ultrasound whilst a load is placed on the tendon (voluntary contraction) and the change in length used to work out strain (% strain = (change in length / initial length) x 100). 4 studies used MRI, and 3 studies used 3D ultrasound to calculate strain. Most studies measured longitudinal or tensile strain, some measured transverse strain. The effects of chronic (few weeks) and acute loading (eg hopping protocol) were also considered. Three studies investigated strain in Achilles tendinopathy – 2 longitudinal and 1 transverse strain.

Here is a summary of the key findings: 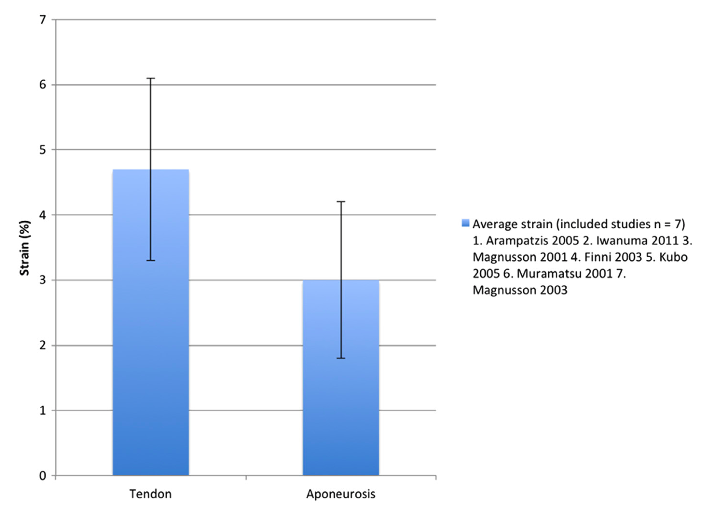 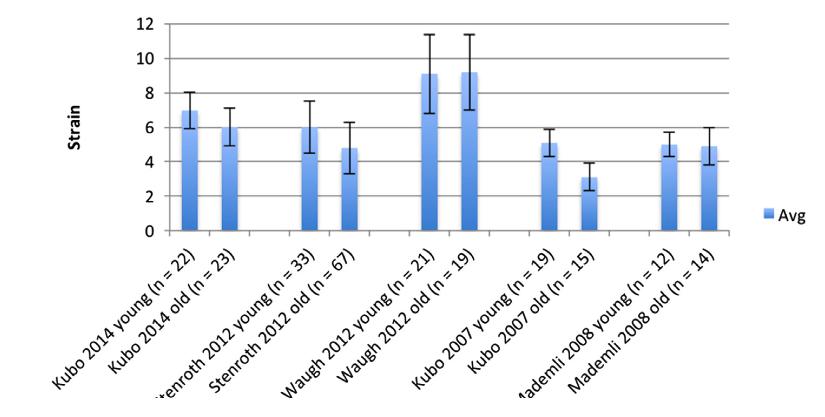 Clinical interpretation: I think this is a super review for shedding some light and making some sense of a complex area. Key message is specific chronic load may reduce tendon strain/increase stiffness, but creep over time or increased strain with prolonged loading leading to injury is not supported by the literature – so creep does not seem to be a plausible injury mechanism. The question of whether older tendon has more or less strain comes up – the balance is less strain/more stiffness – but this may be partly a maturation effect. In any case it does not matter - older people have less muscle strength and therefore muscle-tendon unit function so load it! (carefully)

Stijn Bogaerts’ PhD will be concerned with measuring strain in different parts of the Achilles tendon. The authors elude to new techniques that can do this such as algorithms that track movement of specific parts of a tendon on ultrasound. There are also elastography tracking techniques that have been used. There may be differential strains in different anatomical regions and in the soleus vs gastroc, with implications for Achilles injury. See this blog by Seth O’Neill for more discussion about this.

What they did: Lorimer et al. have performed a systematic review investigating how risk factors for Achilles tendinopathy (AT) are related to lower body stiffness. In another recent review the same authors found high vertical and propulsive forces as well as increasing surface stiffness in running and a high arch were protective, and high braking forces in running increased the risk of AT.

The authors thought that lower body stiffness during running may provide a better measure of injury risk. Joint stiffness (joint rotation for a given force) determines leg/vertical stiffness (leg or centre of mass displacement for a given force). An easy way to think about it is that the body acts like a spring in running (spring mass model), and this spring behaviour is made up of smaller springs (the joints), and all the springs have a particular stiffness (see figure below). 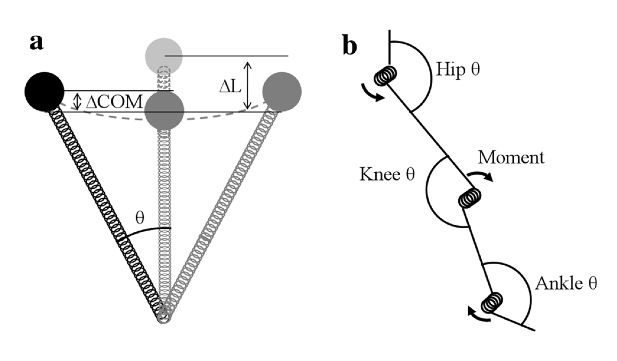 In this way leg/vertical stiffness provides an indication of how load is attenuated across several joints and this involves ‘muscles, ligaments and tendons working against an externally applied force’. The authors thought that identifying single measure like stiffness would be helpful because it is influenced by many of the known biomechanical risk factors, may provide a better measure of injury risk.

They searched for studies investigating the link between joint/leg/vertical stiffness and potential risk factors for AT, including vertical/leg/joint/ankle/knee/hip stiffness; arch height; braking force; vertical force; etc.

What they found and interpretation: High braking forces were associated with high vertical stiffness. Leg stiffness was also increased with increasing braking force at preferred running pace. Increased propulsive force and increased vertical force are protective for Achilles tendons, yet they were also associated with increases in vertical and leg stiffness. So this highlights that the relationship between vertical/leg stiffness is obviously mediated by other factors, eg braking forces. Maybe greater loading during landing/braking can be injurious to the Achilles tendon because it is the classic eccentric phase? Maybe it is because it shifts the ankle strategy towards one of greater dorsiflexion?

Running barefoot or with minimalist shoes generally increases Achilles loads (Barton 2016) and this review found running with less cushioned shoes was associated with increased vertical and leg stiffness during running. This effect is opposite to changes in surface stiffness (more cushioning = more stiffness); but the effect sizes were small and confidence intervals large. Given runners adopted a midfoot strike pattern when runners were barefoot, the foot strike pattern rather than the shoe characteristics may be more important in modifying stiffness.

Clinical interpretation: There is suggested to be a happy medium for leg/vertical stiffness.. ‘Extreme levels of lower extremity stiffness have been related to reduced joint motion and increased shock and peak forces’..and…’too low a level of stiffness has been associated with excessive joint motion’  (Brazier 2014, Butler 2003) – both may have injury implications. However this review shows that how load is absorbed throughout the kinetic chain seems very difficult to predict from lower body stiffness. What the individual joints and tissues are doing is obviously relevant, not just the leg/vertical stiffness.

Take to clinic message? Thinking about Achilles load based on joint excursions and loading ratings (from what we can observe clinically with video) is probably the key. 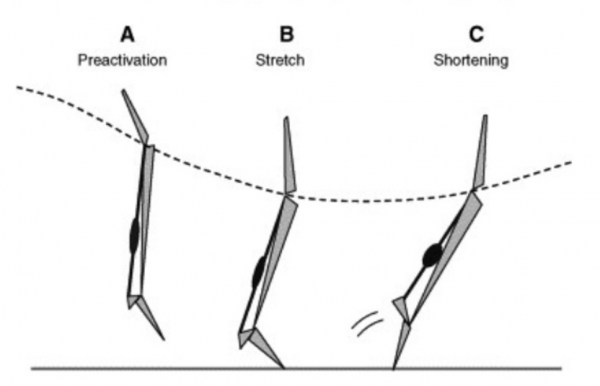 PodcastsApr 2019
Injection Therapy - What does the evidence tell us? 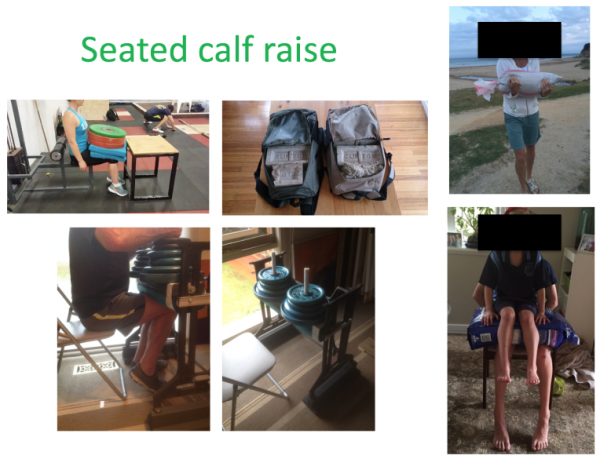